Normally I'm not one to get into politics (or religion - I have my options on both and I'm happy with them and I don't really feel the need to attack others with my thoughts on these matters), but today I read something that generally stunned me.  We, the American People, owe about $13.258 trillion dollars.  Trillion - that's with a 'T'.  As in, "a million, millions".  That is such an unfathomable number, that its hard to even compare it to something real.  I personally have seen a million of a thing (I saw an exhibit with one million cents. It was a whole lot of pennies!).  But a trillion is just silly.  And 13 trillion is beyond silly.  I mean, who in there right mind would let us owe them 13 trillion of ANYTHING, let alone dollars!

I found a few things to put into perspective of what a trillion (let alone 13) could be:

a) the adult human body is made up of approximate 50 trillion cells.  Hair cells, skin cells, brain cells, all of them = 50 trillion.
b) The Milky Way Galaxy (where Earth hangs out), contains about 100-400 billion stars.  It would take 2.5-10 GALAXYS to equal a trillion stars.  (Over 33 GALAXYS worth of stars to equal 13 trillion!)

I thought; what would George Washington think if he was told 230ish years later the country he help found would own $13 trillion dollars?  He'd probably ask for a cup of tea and a smoke... 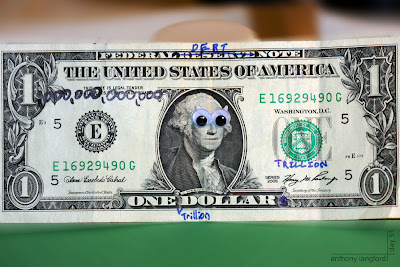