Yesterday, I was trying to take a picture of some sewing needles close-up, but it was around 1am when I was trying to shoot them.  In my half-asleep haze, I kept trying and trying to get a good shot.  No matter what I did I couldn't get it to look right.  Tried different lighting, angles, everything... What I should have tried was actually using a macro lens.  Sigh.  Today is the "redux" of yesterdays attempt at getting a macro shot of needles!  Take two! 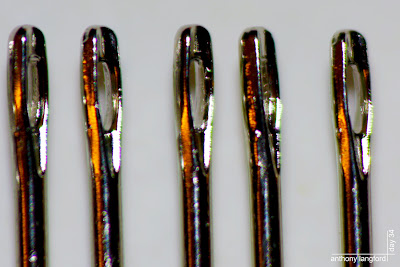 Posted by AntTree at 9:52 AM
Email ThisBlogThis!Share to TwitterShare to FacebookShare to Pinterest