Well, I've finally done it - I've been saving every penny and nickle I could get a hold of - and I finally purchased a professional-grade, full-frame digital SLR.  Now, don't get me wrong, I loved my 40D, it's been used (and slightly abused) for years and never once complained.  I've gotten some great photos out of it, and it will still be with me in my bag whenever I go out shooting (true, as my backup camera, but still in there!), but I realized I really needed a higher-end camera and since Canon just released their newest uber-camera, the 5D Mark III (yeah, I know they released the 1D-X as well, but that's like $11k) and I bit the bullet and got it.


This project is about my first impressions with my new toy and my first "real" photo I took with it.  Once I ripped open the package and threw the battery in I was amp'ed to get shooting - but that's when I remembered that the batteries are always shipped uncharged.  So, 2.5 hours later - I was amp'ed to get shooting!  I took hundreds of just "play" shots around the house; books, the wall, legos, my ironing, a wife who was amused at first but then gave me the look of "I'm going to put that camera someplace very uncomfortable if you don't get out of my office", and just about everything else that I could.


After completing my "shoot everything insanity", I decided that I needed to actually take a picture of something "artsy" and on purpose.  Unfortunately, it was nearly dark, cold, windy and raining outside - not what you would call "prime" shooting environment.  I decided, hey, this is a 5D - it's the Mr. T of cameras - I pity da foo' who uses a Nikon! (I'm kidding!  Nikon people don't get all crazy!)  I poked my head out the front door and I saw nothing that was very interesting until I looked up and spied a ton of birds just hanging out on the power lines.  They were just all standing around chirping at each other, and every once and a while, one would "quawrk" loudly and chase one off the wire (who would just fly/hop down the line a bit to continue his conversation with another, hopefully less angry companion).  I wasn't particularly looking to get a specific shot of two birds having an argument, but I think I got quite lucky with this photo.

Note: on all of these photos, to really see the detail you need to click on them to enlarge. 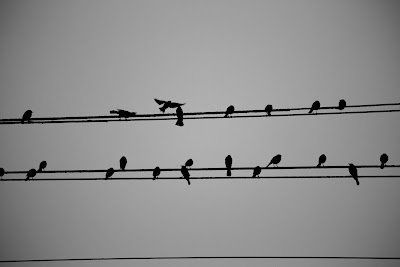 Cropped version (for ascetics, size reduced by ~60% from original size) 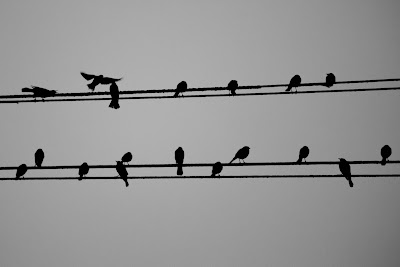 Now the amazing part, close-up of Angry Bird Quawrking (this is approximately 13% of the full image).  Notice you can even see his little claw/toes holding onto the wire and separation of his tail feathers! 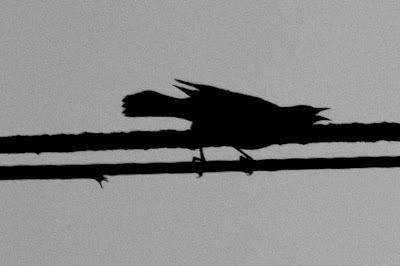 Posted by AntTree at 11:06 AM
Email ThisBlogThis!Share to TwitterShare to FacebookShare to Pinterest