I was watching these two gentlemen play tennis today, I have to say, they might be the worst players in history (myself not included, but then again, I don't know how to play).  The man serving (see pic) would act very professional about it.  Bounce the ball, get his racket into "power-slam" position, throw the ball up, point at the ball (as if to say: "Hey!  Ball!  I see you!  You are right there!"), and then as the ball was just at its perfect "hit-me" point, one of two things would happen:

A) he would miss the ball, and swing the racket so fast that I thought he might break the sound barrier, or:
B) he would hit the ball so hard, that is flew at Mach 2 at the other guys head, who would just duck and the ball would bounce off the back fence.

I'm thinking the triple-latte before playing might have been a bad idea. 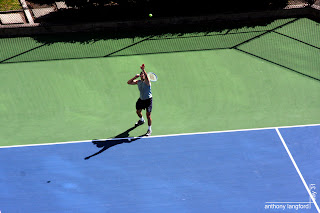 Posted by AntTree at 11:18 PM
Email ThisBlogThis!Share to TwitterShare to FacebookShare to Pinterest