I'm posting another domino picture because yesterday when I posted the first picture, I asked Theresa: "Do you know how to play dominoes?"  She replied: "Stack them up and knock them all down?"  This made me a bit sad, for that is not "playing" dominoes, that's "playing WITH dominoes".  To play dominoes, it a fun game of strategy, mathematics, and a smidgen of luck.

When I was a kid and I mean, KID (like 6-7), my dad used to play dominoes with my uncle and their friends in back of the house, in what was known as "dad's lair".  We kids weren't really allowed back there (lots of things we could have killed ourselves playing with), but there would be times when they were playing that my dad would let me back there just to watch... as long as I was quite and didn't touch anything.  I didn't.  I just watched them play for hours talking about sports, woodworking and whatnot.  Finally, one day my dad got up to go get more beer (ginger beer for me), he asked me to play his hand.  I was stunned and thrilled.  I took his seat with a sort of reverence.  Sort of like the captain of a ship giving the wheel to a lowly deck hand.  I gulped, shakily look at each 'bone' and waited my turn.  When it got to me, I carefully placed my bone and called out "fifteen".  The guys laughed and thought it was "cute" that I knew how to score.  About 5 min later, my dad returned, the hand was over and I had scored 50 points (which for a single round is pretty good).  After that, they would let me play (again, as long as I didn't talk and didn't touch anything... except the dominoes and to pass the bottle opener).  Dominoes was the first real "game" that I fell in love with, and although I've played many hundreds in the years since, it is also still my favorite.

Well, Theresa reminded me that many people play with dominoes rather than realize that are for an actual game.  So, I thought: "what the heck!" and I took a picture for those poor souls who are missing out on the TRUE fun of those little tiles.  Enjoy! 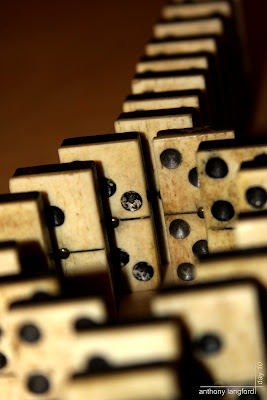 Posted by AntTree at 10:46 PM
Email ThisBlogThis!Share to TwitterShare to FacebookShare to Pinterest