I enjoy walking around San Francisco - when the weather is "photo friendly".  Recently I was walking around the Moscone Center, and they have a great park/kids area (called "Zeum").  The park area has a lot of interactive areas for kids and parents.  I was strolling though, and noticed it also has a lot of fun photographic spots to get some great cityscape shots.  Here is the first, facing north-east.

Technical bits:  Using my 18-55mm lens at 18mm with the following settings: f/14 at 1/500th (ISO 400).  I think I should have moved the ISO to 200 or even 100, I still could have had the aperture at f/14 with a speed of 1/250th (or 1/125th) and gotten a slightly better shot.  I also should have bracketed for both the sky, the white buildings and the shadows from the trees - it would have been fun to combine them in post-production - but I was unable to due to the volume of people walking around.  I was lucky to get a show without really anyone in it, because for the most part, folks were walking in front of me the entire time I was shooting. 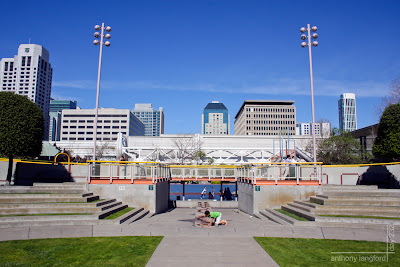