Sometimes you can see the most mundane/boring thing, but for some reason you are intrigued by it.  I saw these two lengths of crepe paper twisting around each other in the wind with a perfectly blue sky as a background and I thought it was a great example of both simple, pure colors and of textures. The separation and then mixing of the red and yellow to create a nice green tone at the point where they overlap was something that I didn't even notice until I was looking at the picture.  I imagine since the paper was constantly moving in the wind my mind didn't have the chance to see the subtle hues of green.

For this picture, I kept the photoshopping to a minimum.  I increased the contrast and saturation slightly, but mostly left it alone.  I know its a simple picture, but sometimes there is nothing wrong with simple.

Ps: I was going to name it "DNA of Colors", but I thought that might have been a bit too geeky. 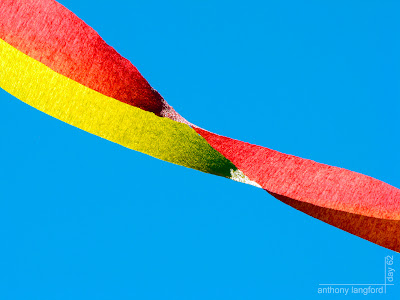 Posted by AntTree at 12:31 AM
Email ThisBlogThis!Share to TwitterShare to FacebookShare to Pinterest