The Art Quest - Trophies from Denver

Happy New Year to all!

2014 ended in a crazy way.  In early December, we had a strange convergence of luck and work that ended up with us going to Switzerland and France for a couple of weeks.  We got to visit some amazing museums and sites.  We even spent Christmas at Notre Dame Cathedral.  After our European trek, we came home for a few days (literally), and then packed back up and headed to Denver for New Years Eve - and Grand Prix Denver!

Important Note for California's heading to Colorado during late December - It's frickin' cold!  Not silly "San Francisco" cold where you actually think about putting on your windbreaker jacket.  It's not even the "East Bay" cold when you have the Starbucks barista leave the cup cozie off your double-latte so it will make your hands toasty.  No, this was Stupid Cold.  It was Negative19.  I'm not going to type "-19", because that little "-" isn't powerful enough to impress how cold it was.  I'm using the whole damn word for this one!  Negative Nineteen Frickin' Degrees!  Cold.

Just in case I'm being too subtle here, NOT flip-flop and t-shirt weather.

Well, after getting over the insane weather condition and celebrating the new year, it was time to head to the Grand Prix, both to play some Magic and continue my quest of getting more cards for my Real Magic Deck!  After researching, I discovered there would be 4 new artist for me engage in the quest.  I though since it was so bloody cold, that the Grand Prix wouldn't be too full - I was epically wrong.  The lines for some of the artist were considerable - I guess without some difficulty it wouldn't be a quest!

The first artist I was able to meet was Jeff Miracola, who did two fabulous cards for me.  I requested the two of hearts (as Beebles) and the two of clubs (as Slivers).  The Beebles has already become one of the favorite cards in the set. 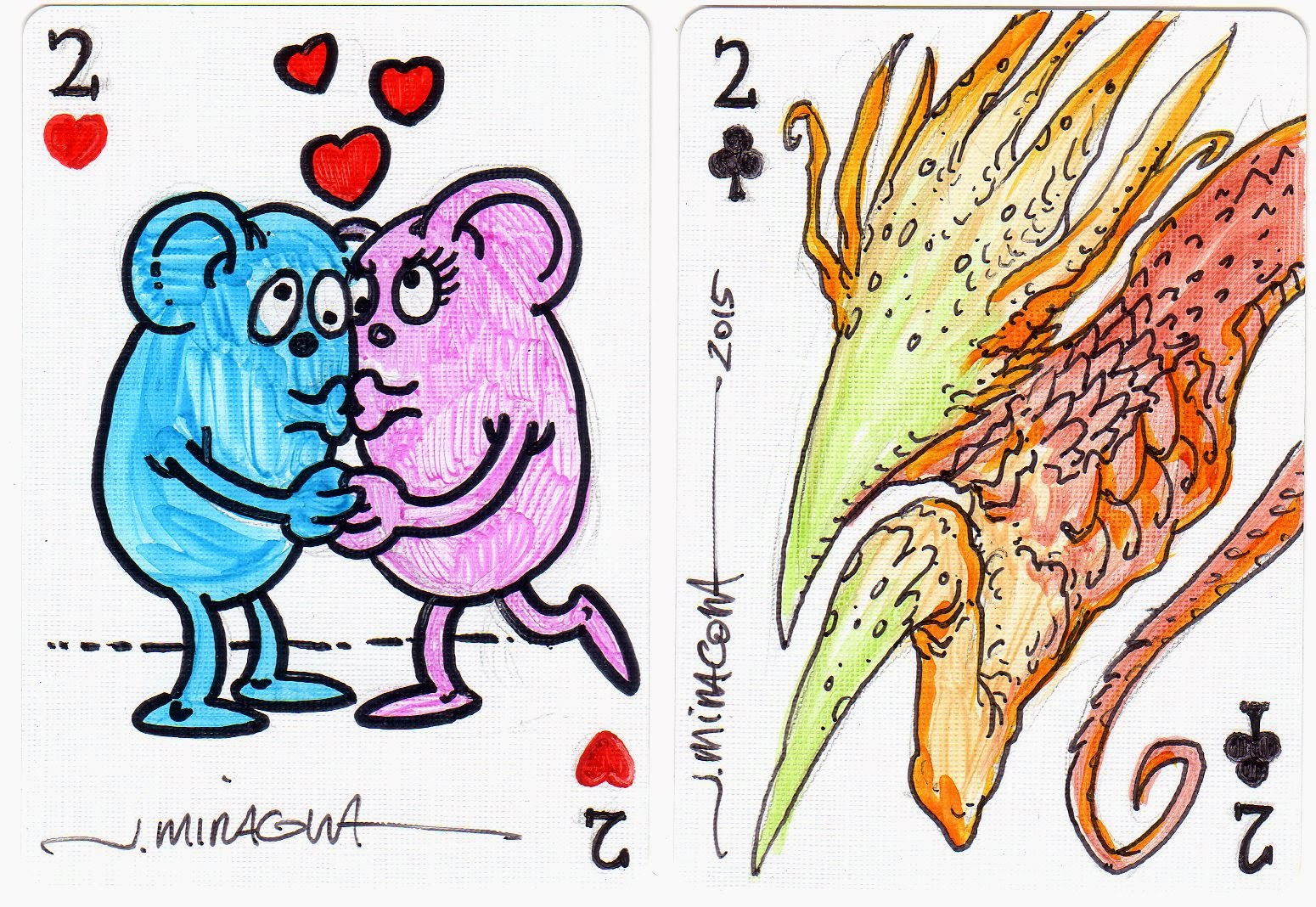 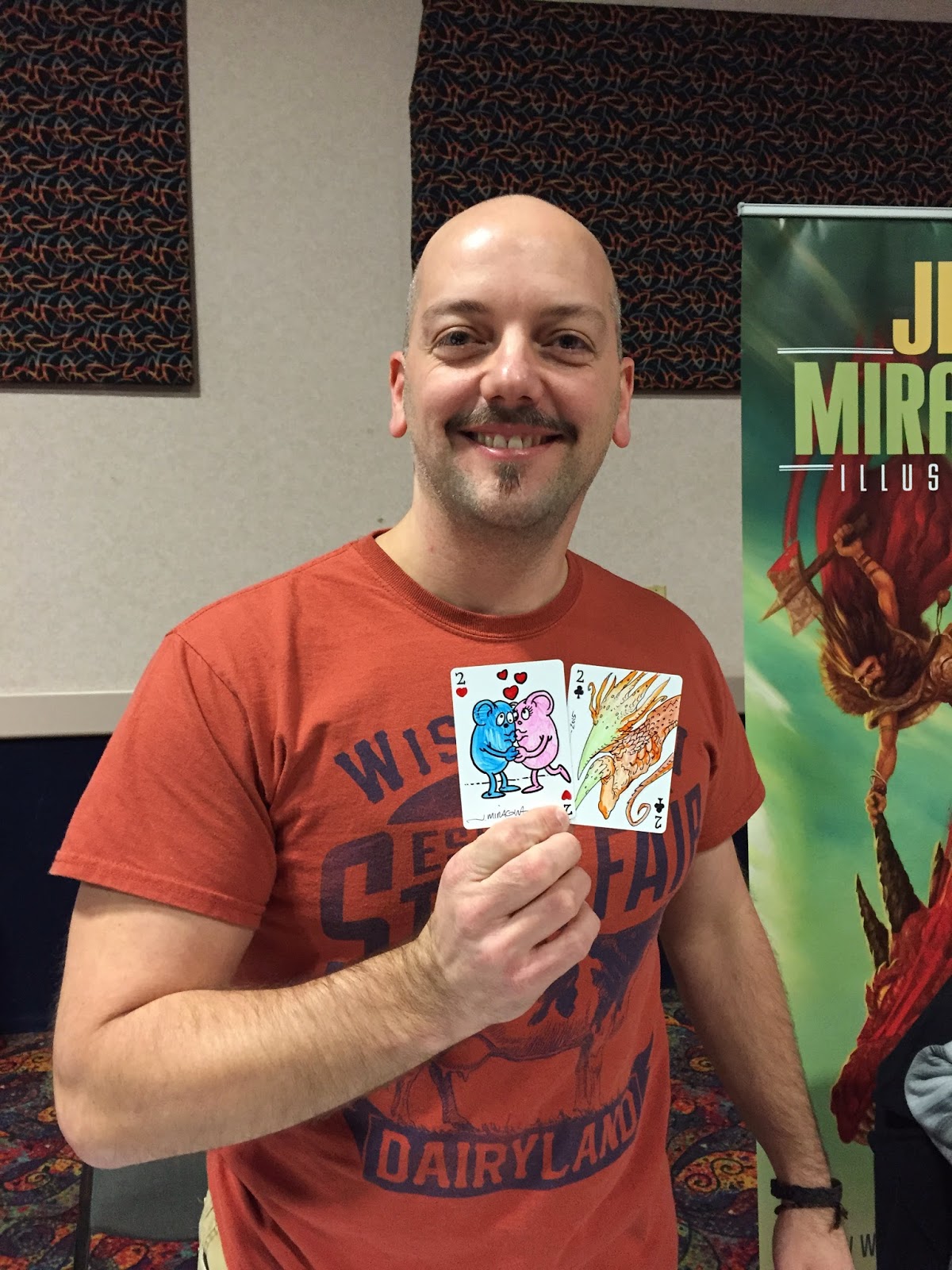 Next up was Jim Pavelec.  I requested the five of diamonds (as Dragon Roost) and four of spades (as Frost Marsh). 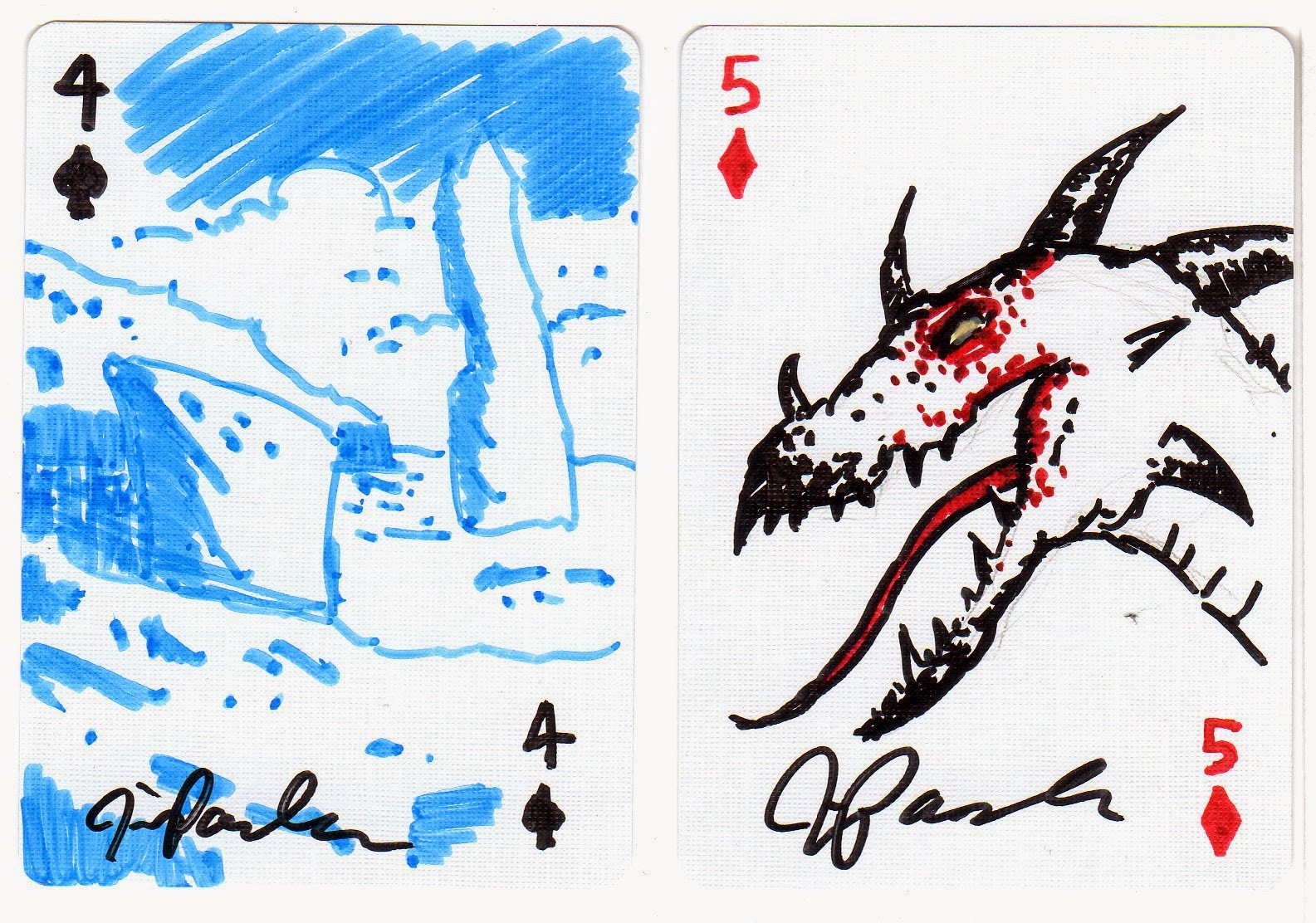 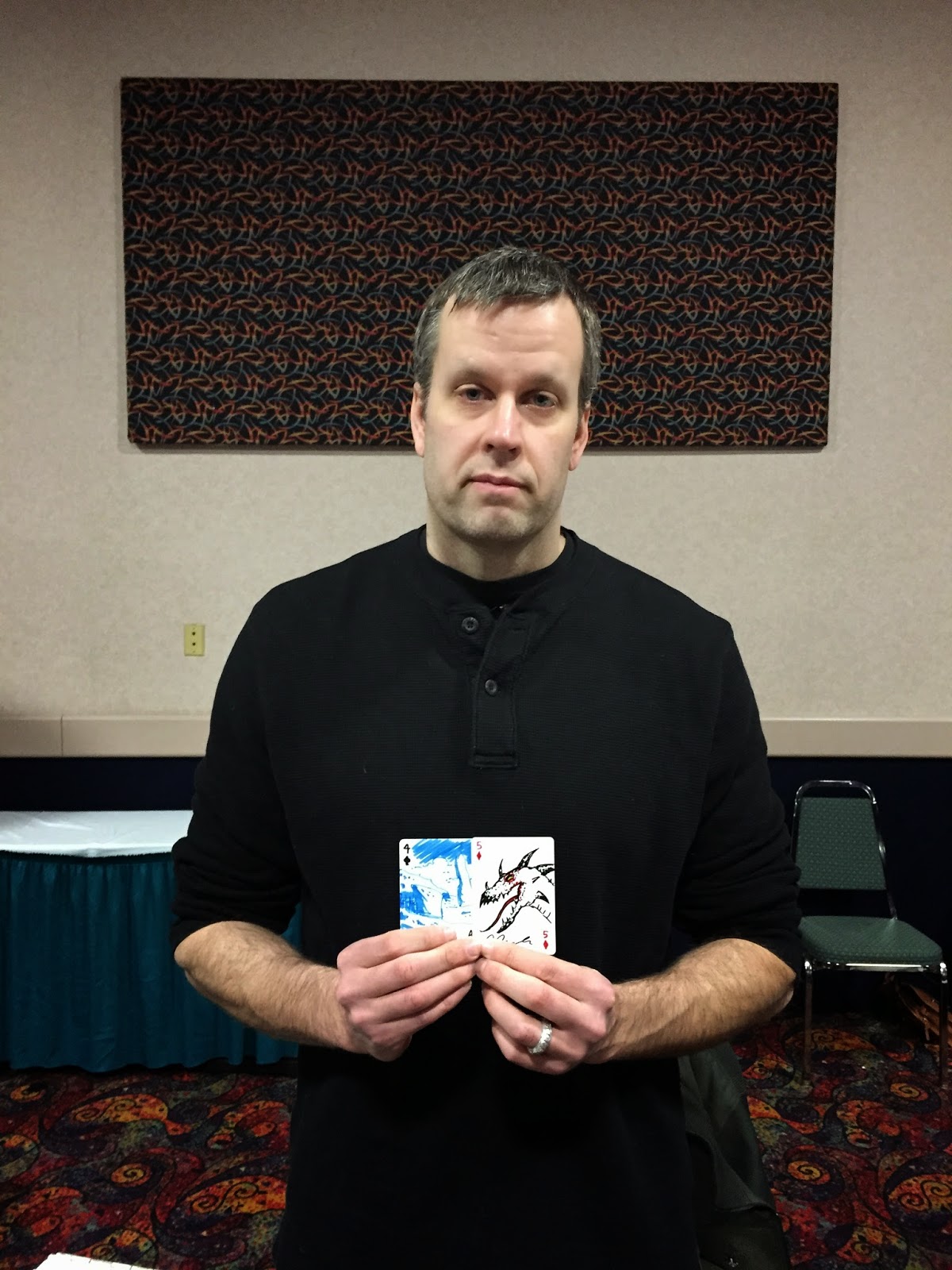 Chris Rahn, who was not listed on the website as being in attendance was a great surprise.  The unfortunate part was he was constantly swamped with fans.  I was finally able to wait in line long enough to get one card done, but was unable to get the time to get a second card.  For his one card, I requested the Queen of clubs (as Nylea), and while he was crazy-busy I think he did a great job. 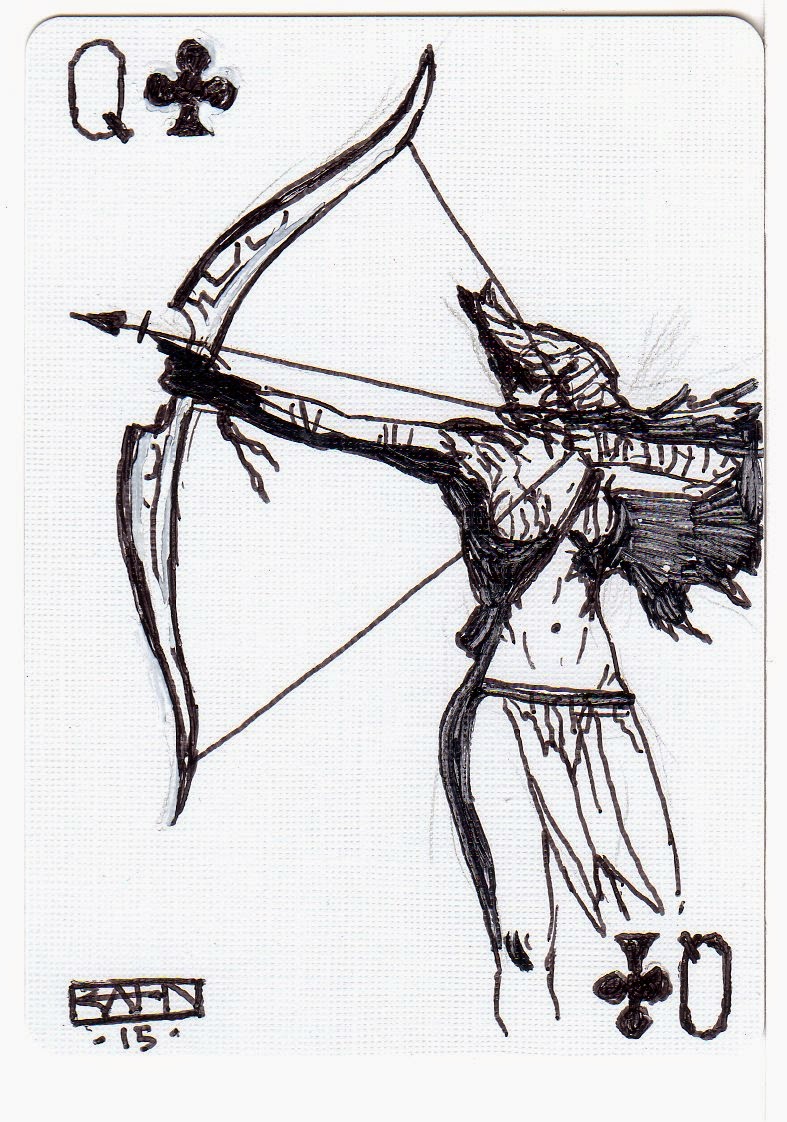 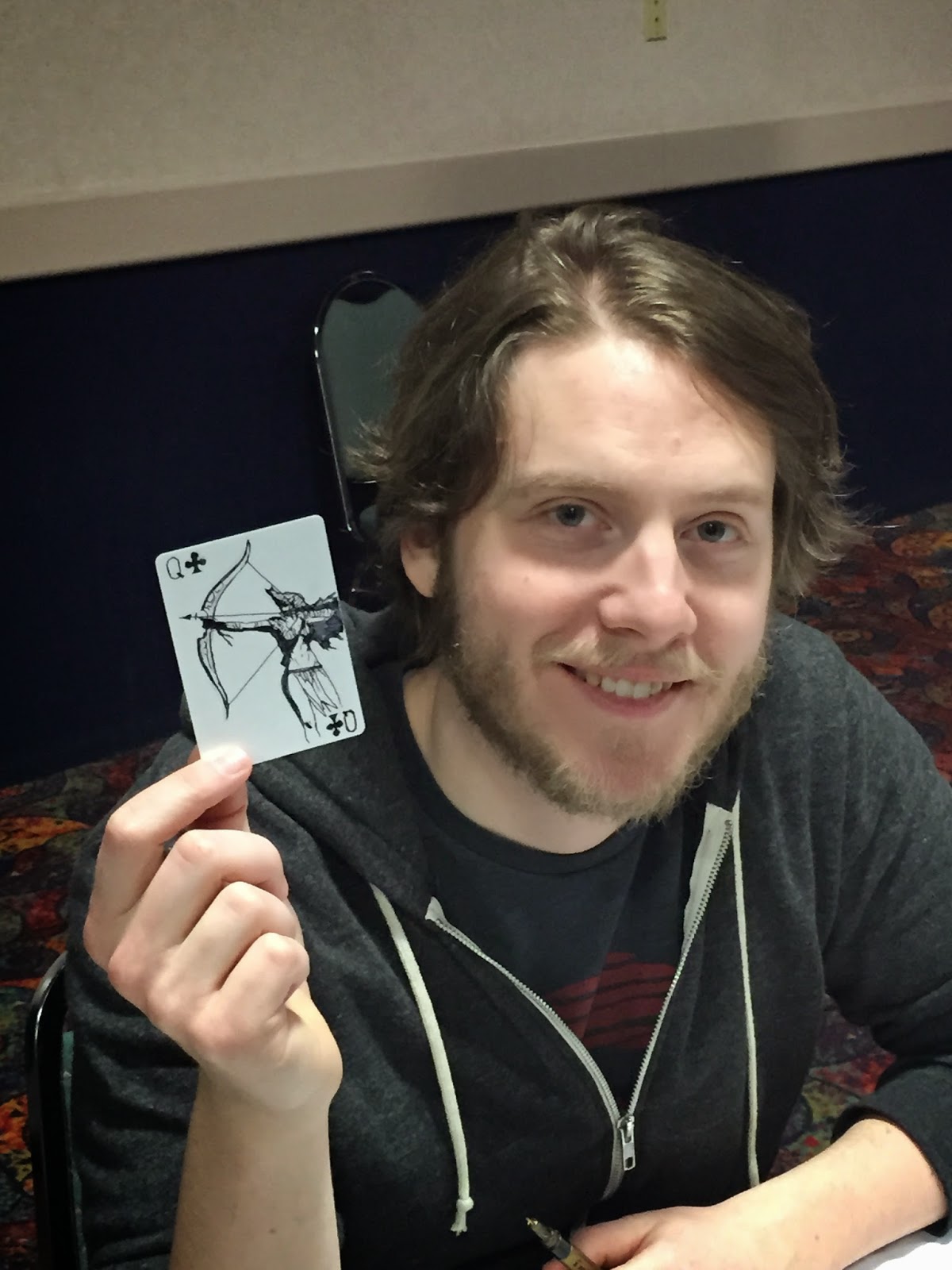 Lastly, I met Aaron Miller, who like Mr. Rahn was frequently busy with lines of fans.  I was able to meet him during a small lull on Friday and asked him for two cards; the King of diamonds (as Ajani) and the ten of hearts (as Chained to the Rocks).  After he flipped my binder of all of previously completed cards, he offered to do full-paintings of the two cards I requested.  I totally jumped at the offer!  I love sketches and drawings, but any time I can get a full art card I always take it (see the Steve Argyle cards).  I knew these would take a considerable amount of time, so I basically left him be until Sunday afternoon.  Sunday afternoon I went to collect the cards, and I was saddened to learn that he just didn't have the time to finish them.  He showed me the sketches that he started and they looked awesome.  He was really excited to work on them and wanted to be able to spend time to complete them correctly.  He even offered to ship them to me (for free!) once he was done - so I certainly couldn't say no!  So, I'm awaiting these two pieces to arrive, and as soon as they do I'll post some pics of them.

Posted by AntTree at 12:51 AM
Email ThisBlogThis!Share to TwitterShare to FacebookShare to Pinterest