We were driving around Santa Cruz along the beach enjoying the night air, when I decided to pull out the Canon and take a few shots.  I wasn't really trying to shoot anything particular or even get a good shot, but sometimes when you get home and look at the photos you shoot, you are surprised at what you get.  This shot is of West Cliff Drive, at around 10pm without any lights.  I was using my fixed 50mm lens at f/1.4 to try and get as much light as possible, but it was still taking 1/2 a second or more to fire.

I called this shot "City of Smoke and Fire" because the blurred lights from the houses look kind of like fire and the "smoke" is actually the trees.  Its ironic to me, because when I look at the photo I imagine a scene out of a "Blade Runner" type movie (or something very Cyberpunk), but in reality its all of these nice houses surrounded by trees right near the ocean.


Whoever said "Photographs capture reality" clearly didn't play around with their camera enough. 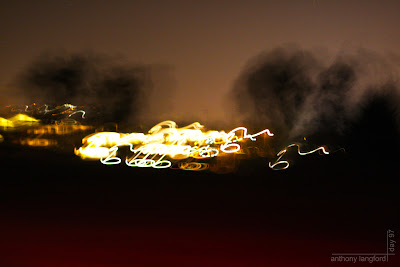 (Click picture for larger view)
Posted by AntTree at 10:12 AM
Email ThisBlogThis!Share to TwitterShare to FacebookShare to Pinterest