This is from a small necklace of Theresa's, that I thought just looked cool.  It's not a very large or 'loud' piece of jewelery, but its got some great colors.  All of the gemstones are muted (re: they don't have that 'Bedazzled' look), and the enamel painting uses a lot of dark, rich colors (like the green in the photo).  The total non-chain portion is only a couple of inches long (perhaps 1/2 wide), but this close-up makes it look huge!

I've also starting using some different methods of shooting these pictures, and I'm hoping it comes out well.  First, this is my first attempt at using RAW format (converted to JPG so I should share it here).  For those photo-novices (which still includes me), RAW format basically means, the camera does not do any compression on the file when you take a picture - it just takes all of the data that the sensor collects, dumps it into a huge file and lets you "develop" the shot later on the computer.  In theory, this is nice because it means you, as the photographer gets to select all the variables on how its compressed (compression is another way of saying: "make the picture file size smaller, but makes the quality of the picture worse").  Its more work, but you have much more control over what the final picture is going to look like as well as more options to fix "iffy" shots.

Its also the first time that I've used a background to shoot against.  The "green" background I used because I thought it complimented the green color of the leaves, but at the same time gave it a nice "old" feel.

I'm sure I'll get better with both using RAW format and backgrounds in the future, but for my first attempt, I'd give myself a B-. 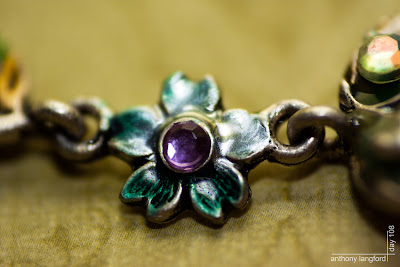 Posted by AntTree at 4:01 PM
Email ThisBlogThis!Share to TwitterShare to FacebookShare to Pinterest