Sometimes no matter how hard you try and setup a shot, how much planning you put into a project, or dedicating hours to a task, you just don't get what you want.  That's how it is with pictures sometimes.  I was planning out a night-time shoot where I wanted to get pictures of the stars and night sky (uber-long exposure at f/32), but no matter what I did I just couldn't seem to get it right.  I tried all kinds of different combination's of setting on the camera and still, nothing but either black or random blurry splotches.  So, after about 2 hours of trying, I decided that it just wasn't going to happen tonight and I'd pack everything up.  After putting all the cables, tripod, timers, notebooks, memory cards and other miscellaneous junk away and I though: Hey, I have this large lamp out (I had a large light out so I could see everything while I was working - and YES I turned it off before shooting!) and there was a neat shrub/bush thing next to where I was.  I thought I'd just take a quick shot of it before leaving (I was darn well going to get SOMETHING out of this experience).  After the test picture, I noticed my shadow fell across the shrub in a cool way.

Two shots later, I got this nifty self-portrait. 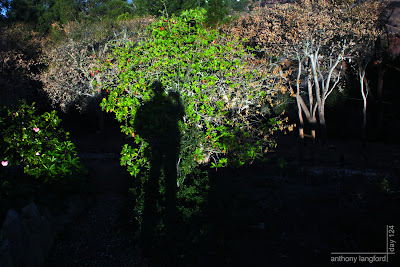 Posted by AntTree at 12:26 PM
Email ThisBlogThis!Share to TwitterShare to FacebookShare to Pinterest