Ah, Berkeley!  The land of psycho-bikers who have no concept of traffic laws or that there is a possibility of other things being on the street - like cars, or other bikers, or people, or newspaper machines...  Now, working in San Francisco, you get use to the large volume of bikers and generally they aren't bad (except on Critical Mass days when they make me late to catch my bus home!).  Now, in the City many bikers actually follow the rules of the road (and yes, there are actual laws for riding bikes!), such as stopping at a stop light, following the flow of traffic, hand-signals when turning and the like.  There are always a few that believe they are pedestrians (which, if you are riding the bike, you are NOT), and do things like ride on the sidewalk and whatnot.

Now Berkeley, even though its just across the bay, is a completely different can o' worms!  Bikers in Berkeley believe they have a protective "I am invincible as long as I ride my bike like a total jerk" field on.  I've seen a biker ride from one corner of the street across to the other corner ("kiddie-corner"), RIGHT THROUGH traffic - and the biker got mad at the drivers for honking at him!  Oh well... At least this biker was "nice" enough to wait for the light to turn yellow. 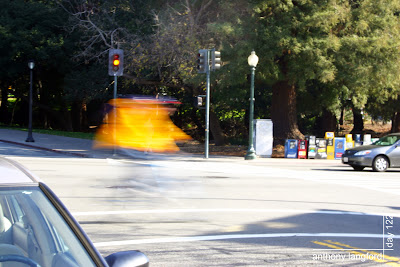 Posted by AntTree at 6:11 PM
Email ThisBlogThis!Share to TwitterShare to FacebookShare to Pinterest