Warning - The following anecdote is not cute nor representative of what is in the attached photo.  You've been warned.

Well, as you might have guessed I've been focusing on taking shots of flowers the last few days.  And in the first shot I mentioned that I prefer taking shots of flowers in their more natural environment (rather than staged).  Now, this shot is of a lovely bunch of roses in a rose garden, so not staged.  But, I took this picture right after they were watered, so it looks like they have 'morning dew' or other water-ish connection going on.  This is one of things that bugs me - normally getting shots of flowers with perfect little water drops on them, with nice reflections and whatnot is one of of the reasons to stage a shot (normally water and flowers don't cooperate so well in nature.  I blame you Wind!).  So, here I was, taking a shot of something that I feel is in the "territory" of staged photos (again, I don't usually mind staged stuff - just not so much with flowers).  Now, its not the best representation of the "water-drop on flower", especially compared to a staged shot, but its not bad.

As I was looking at this photo, I kept thinking: "I'm not going to use it... Its to 'fake', no one will believe it!', but in the end, my insanity took over and I found a way to make sense of it all...

Instead of those being little water drop, all 'artistic' and pretty, imagine instead that the roses have been stuck in the sun all day, people have been coming up to them, taking pictures, generally bugging them to look all 'cute and photographic'.  These flowers are beat!  That's not nature's little dew drops... that Rose Sweat!  Which, could be a lot worse... if they didn't smell like roses.

Does make you wonder the next time you see a model in a magazine looking like she is standing in the rain... Just think, that might not be rain.  Ewww. 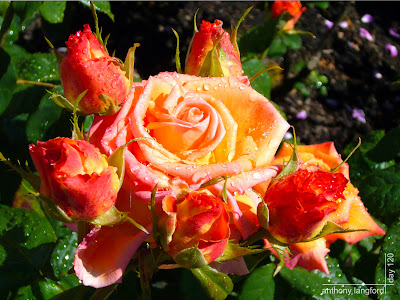 Posted by AntTree at 4:21 PM
Email ThisBlogThis!Share to TwitterShare to FacebookShare to Pinterest