When we heard that Mumford & Sons was going to be a part of the Railroad Revival Tour (as well as its first stop was going to be in Oakland!) we knew we just had to go.  The main idea behind the RRT was: get a few great bands together, put them on an old 1930's train together and have them ride from Oakland, CA to New Orleans, LA, stopping in many cities along the way sharing their music and magic that is trains!  (FYI: I love trains).

We got lucky and were able to get tickets early, but the show sold out crazy-fast!  I think, in total, there were 11k-12k people at the show and it was a lot of fun.  The show was hosted at a park at the Oakland docks, so there really was no seating or specific area where you were assigned.  Again, we got lucky and showed up crazy-early and were able to claim a few "seats" on a concrete wall facing the stage.  Three great bands played (as mentioned, Mumford & Sons, as well as The Old Crow Medicine Show and Edward Sharpe and the Magnetic Zeros), and they really got the crowd going crazy.

If you have the opportunity to catch a future RRT (they did announce that there were certainly going to be more Railroad shows in the future - just nothing specific yet), I would highly recommend it.

Here is a picture of the rear of the California Zephyr train.  The one tragic part of the show was they did not allow any "professional" cameras, so all I could bring was my little point-and-shoot and my iPhone.  I tried to get a good shot with the camera, but ironically, the best shot I got of the train was with the iPhone. 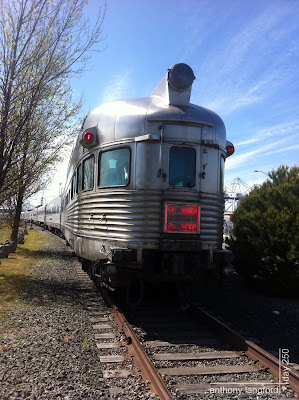 Posted by AntTree at 12:49 PM
Email ThisBlogThis!Share to TwitterShare to FacebookShare to Pinterest